I’m truly fascinated by the creative nature of human souls, and I find it does me good to think about how the choice of our actions influence the future. Dreaming up a New World is the only way I stay sane and hopeful in a place that sometimes feels so disconnected and filled with neglect.

We are inherently creative beings and we choose what kind of future we want to create.

Ever since I was a little squidge, I’ve been attracted to the performing arts. I joke that I pretty much came out of the womb a dancer. As soon as I could walk I was prancing around my Granny’s kitchen or testing out art gallery floors for their slip, slide, and spin factor (while totally missing the paintings on the walls). My Dad had to endure my triple time steps before he’d even had his morning cup of tea! But I couldn’t help it. I loved dancing! It was my soul’s way of expressing, and on reflection, I think probably a way to enter into flow; to lose myself, and meditate out of my worries.

One of my most repeated memories was when I was first taken to the Hippodrome at age four to see Giselle the Ballet. Apparently I was so engrossed in the magic of it all, that I thought it was real! At the end of the First Act when the prima ballerina dies, I was totally and utterly inconsolable.

I also loved singing and songwriting and was lucky enough to sing in a gospel choir led by a beautiful man called Everton. He introduced me to some awesome music and taught me how to harmonize. Well, that was it, I was hooked! I would spend every road trip trying to find the third above every single song! I wrote lyrics as I walked through the allotments on the way home from school, and I even wrote my GCSE Drama piece in my dreams.

When I finally found myself in the business ten years later, after three intense and somewhat harsh years in Musical Theatre School, I entered into what I have experienced as a toxic and destabilizing rollercoaster ride. As with so many areas of life, I believe that the ways of the entertainment industry no longer serve us and we desperately need to rework and rethink the systems we’ve created.

My creative expression and direction was inevitably influenced by these systems, as well as the specific culture I was brought up into. For the most part, I experienced teachers and disciplines that wanted me to learn how to do it like “them” vs. learning how to BE more like me.

Sometimes I wonder what it would have been like to learn how to dance like me, to sing like me, to explore and play in a way that lit up my soul and helped me feel free.

As an overachiever, a people pleaser, and a perfectionist that felt like they were never enough, I over worked, became totally obsessed, injured myself multiple times, didn’t allow for correct healing time, and eventually ran out of steam. My body is still paying the price of my actions.

When I was about twenty I decided to make the move from Musical Theatre into straight acting which only intensified the rejection and difficulty. The UK has a tendency to pigeonhole performers into certain categories. It certainly wasn’t the easiest of transitions for me, but eventually I got a little role in an episode of a TV show, an indie film and a hair advert that temporarily saved me!

Then, just when I thought I had finally caught my big break and was cast in a Marvel Movie, I experienced my most challenging injury to date. A series of unfortunate and traumatic events (a story for another day) resulted in a swift decline into a shell of my former self.

I was so insecure, that even when I landed what some might call my actual “big break” with Wynonna Earp, I was convinced that it was a mistake, adamant that I was going to be fired and sent back to England. I was completely tormented by the voices in my head that punished me for not knowing certain things, told me that I was stupid, ugly, and never ever enough. I believed I had to wear certain clothes, do my make-up a certain way, and fit the “sexy young actress box” if I ever wanted to be loved and accepted.

It’s no surprise though really, coming from a business that led me to believe that if I cut my hair I would be “less desirable” and therefore “less hireable” and that I needed to cosy up to the producers and people in power if I wanted to succeed.

One time I got cast in a role under the conditions that I straighten my teeth!

By 2017 my mental health was at an all time low. I decided that I either needed to find a way to understand my demons more intimately so that I could work with them or I needed to change career paths altogether.

That was when I enrolled myself in a ten day Vipassana meditation course in Cambodia and everything changed.

In that retreat I was handed the key to my happiness, but under one condition: I had to be the one to open the door.

The following four years have been an unfolding into the unknown, coming face to face with my deepest fears and coming home to who I really am.

I’ve been lucky enough to travel across India, Brazil and North America – listening deeply and allowing Spirit to guide me and show me the way.

Along this journey I founded a non-profit organization to help bring in a new, thriving world where we all belong, supporting the most marginalized among us, and funding grass roots initiatives that are led by and serve these communities.

Start the Wave holds such an important place in my heart.

As I’m sure was the case for many of us, it was during Covid, when I was finally forced to slow down, that I realised the importance of committing to my personal healing.

The pain in my body was only getting worse and I knew that I needed to focus on finding the source of the discomfort in my being.

The universe seemed to agree, and when I was given the opportunity to live with a Breathwork facilitator for five months, I knew I had to say yes.

Through the breath I have understood the core of some of my biggest wounds and it continues to be such an important teacher in my life. Breathwork has helped me to see the masks I had been wearing as protection, so deeply scared of not fitting in to what I thought I had to be.

During these five months out West, two psilocybin and an ayahuasca ceremony presented themselves. Having lived in ayahuasca communities in Brazil, I had learnt much about the medicine. Clear intention is crucial, so I thought long and hard about what my highest self needed to call in.

What eventually came through was:

“Total self acceptance and freedom of expression.”

Well, I had no idea what would follow; a very fast unravelling and unveiling of my Non-Binary truth.

A week or so after the ceremony I knew I had to shave my head and get rid of anything that no longer felt like me. I had to strip everything back to remember who I was underneath; who I was before the conditioning, before the media force fed me beliefs, and before the acting began.

You see, I don’t want to act anymore. I want to create. Yes, absolutely, I want to create and play and explore how I can best be of service in this lifetime. I would love to tell stories and represent those that need it most. But when I am off screen, navigating this already confusing world, I can no longer pretend that I am someone I am not.

So, I am currently living in my 1986 VW Campervan, unsure of where my roots will be planted, and yet ironically I have never felt more at home.

My name is Dom.

I am a Queer, Non-Binary, Gender Fluid, Human Being and Becoming.

I am a Creator. An Intuitive. An Activist.

A love warrior. A water protector. And a wave-maker.

But most importantly, I am the most me I’ve ever been. 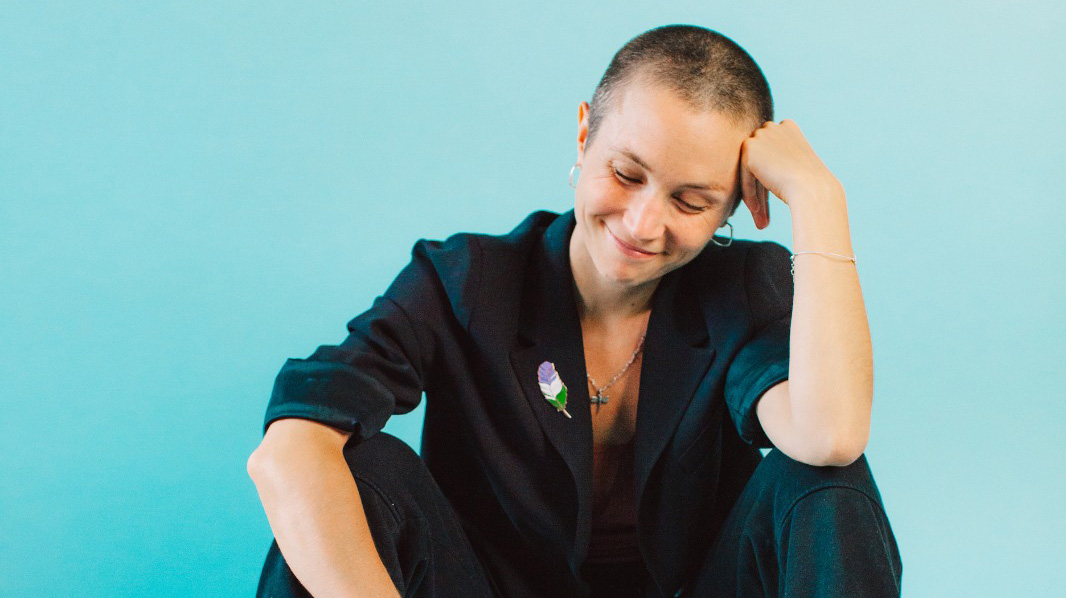 Dom is a queer half unicorn, half butterfly, half human— and not very good maths.
They are also an artist best known for their role in Syfy’s TV show – Wynonna Earp, where they play a bisexual young woman coming into her sexuality and power.
With a huge passion for growth and healing as well as dance and music, they are exploring the intersection of these practices, using creativity as a vehicle for evolution.
They profoundly believe that we are all made of greatness and wishes to support wavemakers worldwide in their important work of bringing in a brighter tomorrow.