I remember when I was younger, coming out often felt like a burden. I would often think “why do I have to tell people this just to clear up assumptions they are making about me based on their own ideals of what society should be? Straight or CIS people don’t have to explain themselves or make grand gestures to be understood or accepted, why should I have to?” It also brings attention to you, a spotlight so to speak, making it glaringly obvious that you are “different” than what society has deemed “normal”. And who wants that? When you’re in middle school, high school or college, the last thing you want is a spotlight on your differences. One thing I did have going for me is I am lucky enough to have very understanding and accepting parents – my fear of coming out was never about them or their reaction. At times now I feel guilty for not embracing the fact that I had a supportive family and using that as strength to come out sooner when some many folx have the opposite experience.

I also struggled with the fact that back in the late 90s and early 2000s, there was almost no representation of the queer community anywhere, especially on TV. And when it was represented it was almost always negative, and almost always people who identified with being gay. For someone like me, a very visual and artistic person, not seeing something that represented who I was or how I felt was very hard. I knew I wasn’t gay, but I also knew I wasn’t straight, but nothing in-between that was widely shown in any media at that time, or at least any media I came across. This led to the feeling that I was alone and the only one dealing with these feelings – and that made the fear of that spotlight I spoke about even stronger. It’s bad enough to be different, but to be the only one in the world, HOLY SHIT, no thanks.

Looking back now I can honestly say I never came out cause it was easier to stay hidden behind a mask that society embraced. Being bisexual I could easily just date men and pass as straight. I could easily avoid the possibility of losing friends, having my extended family look down on me, or possibly not getting jobs, if I just pretended to be 1/2 of who I really was inside. But because of this I spent so many years of my life feeling like a coward and sad that I couldn’t freely be myself. I never realized that coming out later in life would still come with its own set of challenges.

When I finally saw myself represented on TV, and was honestly in a place of loving myself enough to accept all of me, I had just turned 36. I was married to man, at that point for 10 years, and we had a 9 year old son. To say things got very complicated inside my head and heart would be an understatement. I struggled with this new light that seemed to be wanting to burst from every pore in my body, screaming to the world that I was queer and finally able to accept and love that part of myself, and the darkness that wanted to creep out of the corners of my mind saying it was risky to speak my truth cause of what I had the potential to lose. I decided to be strategic and calculated about how I approached this new identity I was so ready to embrace. I started off by telling my best friend and seeing how it felt – and holy shit did it feel bloody amazing! It was like I had been carrying around a backpack full of heavy stones and by telling him my truth, he reached in and took a stone out for me, making the burden lighter. I continued my baby steps telling some other close friends and little by little the backpack became lighter.

I was still terrified to tell my husband, cause despite this truth changing nothing in the way I saw our marriage or my commitment to it, I didn’t know if he would feel the same. And I was terrified of what his reaction would be and what that could potentially mean for our family. I’ve always been a writer, I find it’s the easiest way to truly get out all the words you want to say without the anxiety of speaking them aloud. I wrote him a very heartfelt letter about it and hoped for the best. He took it okay. He was a bit confused for awhile and kept thinking this meant I wanted a divorce cause I wanted to now date women but he eventually understood that this had always been who I was, from our first date, but I just wasn’t ready to tell the world yet. We would eventually get a divorce a few years later and if I am being completely honest my queerness may have played a role in our further growing apart but it by far was not the only reason we grew apart, or had already been growing apart when I came out.

Sadly coming out later in life also doesn’t make you exempt from the challenge of dealing with losing friends or family due to your truth. I didn’t lose any family but I did lose some friends. I guess age doesn’t make a difference when it comes to indifference and people’s honest views of the queer community. But my truth also brought me a ton of new friends, who accept and embrace all of me – so there is a trade-off. I have never experienced such a sense of community and belonging as I have within the queer community I have found.

A few years into my newly embraced queerness I also started coming to terms with and accepting my true gender identity. Having been someone who had lived almost 40 years as a woman, and often times later in life living in a super feminine presenting way, it was scary to take that mask off and live authentically non-binary. I had embraced my “tomboy” nature in high school and early college but had quickly packed that away when I realized it was the main factor in people thinking I was gay – and when I was in a place where I didn’t want the “difference spotlight” on me it was an easy adjustment to hide the truth. I started dressing and presenting much more feminine and continued to do so into my 30s, being very conscious of how I was perceived and if the truth would crack through at any moment. I remember how being called “girlfriend” or “sis” never quite felt right, but “dude” did. Getting to know some non-binary and trans folx helped me understand better what it all meant – representation matters yet again – and I started to feel the remaining stones in my backpack shift, reminding me I had more stones to discard when I was ready.

First thing I did was chop all my hair off – something I had wanted to do again since I was kid. I remember so much of my life was spent trying to fit the mold of the ideal woman with long, beautiful hair. So cutting it felt it like a great first step in shedding that old mask. It was liberating in a way I did not expect and another stone was lifted from my backpack. I then started covering myself in tattoos, which had always been a desire since I was in college but I feared would look too masculine. I even remember thinking so often “what am I gonna look like in a dress at work with tattoos all over my arms?” Each tattoo – another stone gone. I then started to shift the way I dressed, embracing the clothes I often wore in my “tomboy” phase and had honestly missed so much – another stone gone. I stopped wearing makeup, something I had always hated – another stone gone. I started living more authentically to who I was but not quite embracing the full nature of my androgynous soul by changing my pronouns. I eventually got there, thanks to someone very close to my heart walking the same path next to me and inspiring me to embrace that last piece in me – another stone gone.

Now that I am proudly living my life as a queer, non-binary human, it doesn’t mean the struggles are over. There are still stones in my backpack, as there will likely be my whole life. There are a lot less stones but nevertheless some remain. One of the biggest challenges coming out later in life I would like to address, so that anyone else feeling this knows their feelings are valid, is the feeling like we missed out. I can often feel like I missed out on so much or so many experiences that those who come out earlier in life get to experience. I wonder who else I could have become, or what I could have accomplished, or where I would be right now, had I just come out sooner. When I get those feelings, which at times can be often, I look at my son. My beautiful, kind, compassionate, loving son, who is the brightest light in my life, and I realize if anything had been different I wouldn’t have him. And he was at an age where he was able to witness and understand my queer and non-binary awakenings, and be proud of me. He was able to embrace the new me, in every stage that occurred, and knew that he could be his authentic self with me and out in the world, cause he saw that representation in me. I am for him what I starved for at his age. And that is worth all the years of staying hidden. I would live them all over, I would carry that stone laden backpack many more miles to be that for him. I am exactly where I am supposed to be – one more stone gone.

I will leave you with this – it’s NEVER too late to be yourself. It’s never too late to speak your truth. Don’t let your age, marital status, parental status, job, friends, or family make you feel like because of how long you’ve lived with the mask and heavy backpack that you should just keep them on. You are valid in your worries, your concerns, your doubts, your fears – everything you feel is okay and part of the process. But you are welcome in this world, however you show up. When you’re ready take off the mask and start dropping those stones – I welcome you, even if no one else does. But I guarantee you I won’t be the only one. You have a community of people waiting to embrace you. You are not alone! 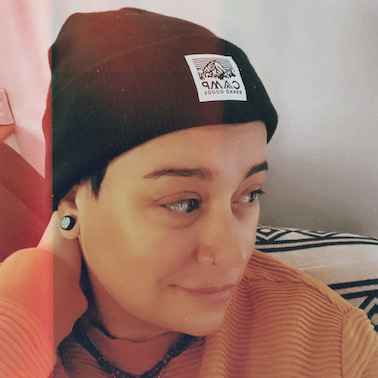 D2 currently works in Change Management Communications for a major financial institution, where they have nurtured their strategic planning and graphic design skill sets. They manage STW’s graphic design needs for all channels and communications, strategize the content and roll out for our Instagram account, and track and organize all of our projects. They are passionate about how positive change can impact the world and strongly believes in the work STW is doing to achieve that goal. They are a constant advocate for kindness in all forms and uses that as a foundational pillar in raising their son, Toby. When not working/volunteering, you’ll find D2 spending time with Toby, creating art in any form they feel inspired by (sketching, painting, upcycling, etc.), and enjoying nature on one of the many hiking trails near home.