Something that is so rarely (if not ever) talked about in the media or online, is how much our own journey in life with activism, environmentalism, veganism, or just about anything, is never going to be linear. Not only will it never look the same as anyone else’s or go at the same pace, it won’t always be moving up either.

We are going to fail time and time again, and that is okay. Because we’re human.

But I learned that the hard way when I blindly and naively threw myself 100% into veganism and environmentalism for a New Year’s resolution. My initial drive to make this change was born out of immense anxiety and a guilt over my lack (and the world’s lack) of mobilization and action around this climate crisis. And with the internet at my fingertips and an abundance of resources online, I honestly thought it was going to be a smooth transition.

It was not. But not in the ways I was prepared for.

I was diagnosed 8 years ago with an autoimmune disease known as Inflammatory Bowel Disease (IBD). IBD is an inflammation/destruction of the bowel wall and intestines. It is a condition that is chronic and incurable. One of the biggest challenges with the disease is your diet. Many different types of food now trigger the disease and (for me) cause ulcers in my colon. I was also born with a visual impairment; another incurable condition known as Congenital Nystagmus. Essentially, my eyes involuntarily (without my doing so) move from side to side, all the time. They never stop. Everything I see is blurry and out of focus. So you can imagine, biking and driving are things I can’t really do well. I’m not really great at walking either, as many of my friends and family can attest by my numerous broken bones and stitches.

These became limitations I was forced to get creative with and work around in situations. And for most things, I could work around them. Up until I tried to join this climate movement.

I always thought my inability to drive was a blessing when it came to climate change because of the many issues with pollution and waste that cars create. And I live in a big metropolitan city with a great public transit system, so getting around wasn’t too difficult. But when you live in the suburbs and are trying to switch to an entirely plant-based diet or buy ‘zero-waste’ products, the lack of a car becomes a bit of a problem. The closest grocery store to me is a 30 min walk. The closest farmer’s market is an hour and a half bus ride. There’s no zero-waste store in sight (no pun intended). And at first, I tried to make do. But I learned quickly that it was going to be a big limitation in my involvement and participation in this part of the environmental movement.

The “vegan” section in my grocery store was also very small and limited, so I didn’t have many options to choose from. But I was determined to make it work and switched out all of the animal-based products I could. However, within a few days of starting the new vegan diet, I got super sick. I felt terrible all the time, always in an incredible amount of pain, and it wasn’t really until like a month later that I realized it was due to my IBD.

With my IBD condition, I can’t eat red meat or dairy anymore (so that was an easy switch to veganism). But I also can’t have any citrus fruits, acidic vegetables, or any raw vegetables actually. I also can’t eat anything high in fibre – which any person who is vegan knows is a staple for all protein-alternatives. So I cannot regularly eat beans, seitan, tofu, etc… and there were no resources online that talked about alternatives to this problem. I didn’t even know where to begin finding protein-alternatives or foods okay for individuals with IBD, especially with only one grocery store close to me. It was disheartening and I had felt a certain level of guilt now placed at my feet, by myself and others, that I was not doing enough, especially because of my privilege in life. This became not only a physical limitation for me, but a mental and emotional one as well. Because the mainstream environmental movement often demands a level of perfection as a prerequisite, which only instilled shame in me when I realized I was failing at going vegan (which is often said to be the biggest action an individual can do to help climate change).

But I hadn’t realized that many of the positive changes you can make to your habits and lifestyle (even outside of veganism), changes that could contribute to minimizing climate change and rehabilitating the environment, are difficult or impossible for people who (like myself) are not able-bodied. This phenomenon is known as eco-ableism (a term I myself was unaware of until I was affected by it). It is essentially when environmental activists and movements fail to take into account those that are less able or privileged then them. But how are any of us supposed to live up to this unrealistically high standard of perfection when the system’s we live in are imperfect by design?

So when we talk about making individualistic changes that benefit the Earth as a whole, we need to be cognizant of the fact that it isn’t a one-size-fits-all approach, and we don’t need to be doing it 100% perfectly to make a difference. Our movements need to be centred on community and accountability so that we can meet people where they’re at, and encourage them to do only as much as they can. We need to be building spaces and communities where we constantly share new perspectives and all collectively readjust and move forward with a better, and more intersectional understanding of the world.

For me personally, coming to better understand myself and my own struggles has played a huge role in me becoming more intersectional. I never fully understood what it meant to be a queer Italian-Canadian woman, living with chronic mental health and autoimmune conditions. I held onto this idea that I had a lot of privilege, and did whatever I could to just assimilate with everyone and everything. But I ended up failing quite a lot of the time because of it. And it wasn’t until I sought out help that I finally acknowledged and appreciated how my intersecting identities not only play a huge role in my activism, but into all aspects of my life as well.

I believe that it is only when you fully understand yourself and your own needs, that you can then champion intersectionality into every aspect of your internal and external activism. Because you’re finally doing so in a way that makes sense to you.

So in the end, what this journey has taught me is that how I show up in this environmental movement is going to look different from others and is never going to be perfect, especially when it comes to veganism. But I’ve learned that veganism extends way beyond just what we eat. It is about where and how we get our food, the way it is grown and packaged, and all the ways it is wasted too. Veganism is a political movement to liberate all animals and humans (like all the workers and farmers) from systems of oppression and exploitation. That is why now I’m just trying to champion intersectional veganism in every space I can, educate myself on all topics of injustice and inequity in these systems, and never stop doing my best. And I can proudly say that over a third of my meals are vegan now and over half are vegetarian. But I also recognize that there are going to be days or situations where those percentages change (for good or for bad) and that is all part of the journey. Veganism and environmentalism on the whole isn’t a sprint; it’s a marathon, and I’m in it for the long haul to make lasting positive change. 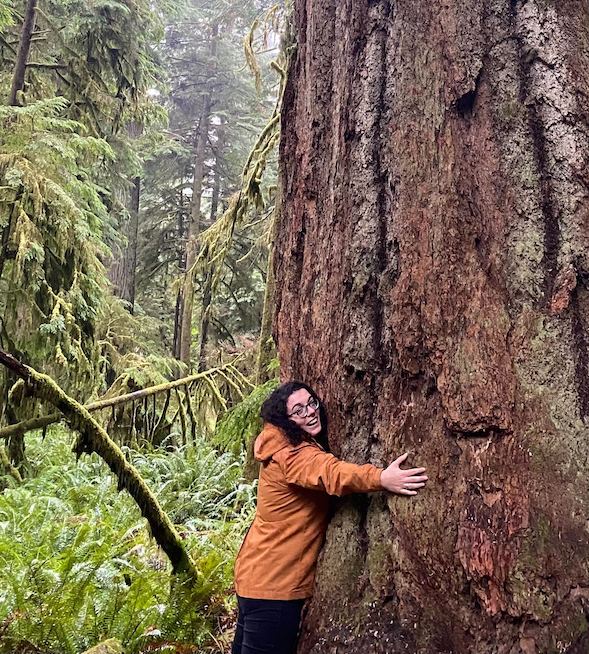 Jordan is an imperfect vegan-ish queer wave-maker, with 4 eyes, 2 left feet, 1/2 a working colon and 1 big heart. Her two strengths lie in her love of art and her skill with numbers, which she uses now as a data scientist and researcher, to bridge the gap between data and story-telling. She believes climate change is the story we’ve failed to tell, and in order to save the world, we need to tell a new one. But there is no single way to tell this story, and we need to stop trying too. It must come from different perspectives and different backgrounds, so we can all contribute to building a shared vision for the future. Which is what she’s trying to do now over on the podcast series, Imperfect Eco-Hero.