International Women’s Day (IWD) is a global holiday celebrated annually on March 8 to commemorate the cultural, political, and socioeconomic achievements of women. It is also a focal point in the women’s rights movement, bringing attention to gender equality, reproductive rights, and violence and abuse against women. But gender equality encompasses so much more than just cis women’s rights. IWD is an opportunity to hear and elevate the voices of queer & trans women, Intersex, and gender-expansive folx. It’s an opportunity to challenge and change the narrative that gender equality only means cis women’s rights. As of 2017, gender equality is the fifth of seventeen sustainable development goals of the United Nations. The official wording of SDG 5 is “Achieve gender equality and empower all women and girls” So where does that leave me? A fat, trans nonbinary queer of color? Is my gender identity not important? Do I not deserve to be empowered? What about Black trans women? Disabled trans and nonbinary folx? Our existence matters, and we will never reach true gender equality until we get out of the gender binary.

It is absolutely imperative that we elevate the voices of women, especially on IWD & Women’s History Month, and as the official IWD website says, “we celebrate women’s achievements, raise awareness about women’s equality, Support women-led organizations.” But people seem to forget that trans women are women, and trans women, especially Black & Indigenous women are being murdered just for being themselves. If International Women’s Day is truly about gender equality, we, need to start including Trans, intersex, nonbinary, and gender-expansive folx because we definitely experience gender inequality. If you’re a cis woman reading this, I’m not coming for you. I see you; Icelebrate you, I honor you. I know your struggle because I was you, I was assigned female at birth (AFAB) and I existed in this world as a woman for 35 years of my life. I am still perceived as a woman in our society. I face some of the same discrimination and issues cis women face, like misogyny, , in addition to transphobia, fatphobia & racism while my gender identity is constantly erased. I’m not saying we shouldn’t celebrate International Women’s Day. What I’m saying is it needs to be inclusive of all genders who experience gender inequality. Let’s fight against the patriarchy together, side by side not against each other.

My history with IWD started in 2014 when my new friends who I now consider my queer parents and bffs invited me to a planning meeting for the 25th Annual San Antonio International Woman’s Day March scheduled for March 2015. I had some experience in the activist world and had attended Lesbian Pride and other social justice marches and events in my hometown of Monterrey, Mexico but I wasn’t too involved in that planning cause I live in the US. I got curious so I went to the meeting. I got out of there with this immense motivation to fight; it lit a fire in me that had always been there but I never allowed it to burn. See, I was scared to speak up. I was just coming out of a very intense depressive episode caused by a mix of intergenerational trauma, migrant trauma, and lack of access to mental health. I migrated to the U.S. with my mom and siblings, growing up undocumented, I lived with the trauma and fear that if I spoke too loud, or was too visible the government would find out and deport me and my family. So I learned to quiet that voice for justice within me but I was tired of being silenced and erased and I was ready to fight and never again have to suppress my voice.

The International Woman’s Day March in San Antonio has a very unique and rich history. PEACE, WORK, EQUALITY were the words on the banner that led the first-ever IWD March in San Antonio 1985. . The march was organized by Chicana lesbians & queer folx calling for peace and demanding the U.S. cease intervention in Latin America. Speakers at the rally included Emma Tenayuca, a Mexican American labor organizer and civil rights activist who, at 21 years old, led a wave of strikes by women workers, including a 1938 labor strike involving 12,000 pecan shellers that is still considered the largest labor strike in San Antonio’s history. Another speaker was María Berriozábal, a local activist for the Chicana movement who In 1981, became the first Hispanic woman to serve on the city council of San Antonio. This march set the stage for future IWD Marches in San Antonio and set the bar for a month-long celebration of Women’s History Month in San Antonio that also began in 1985. The annual IWD marches in San Antonio would resume in 1992. I am now part of this rich history, the San Antonio activist community of POC women, trans & queer folx embraced me and I have been part of the organizing committee since that first meeting I attended in 2014. I got radicalized and got the political education I needed to grow into myself. Being in community with amazing women & queers of color I found my voice and I allowed myself to be free and in the process, my true self flourished, I came out as nonbinary, learned to love my beautiful fat body and embrace and love all parts of myself even the ones I was too scared to love.

Around 2015 or 2016 I began volunteering at the rape crisis center, organizer friends in the IWD planning committee worked there and I was eager to continue my political education by volunteering and serving my community. Subconsciously it was also my way to heal from the sexual assault I had experienced but I had not been able to talk about because the first and only person I told didn’t believe me and victim-blamed me. I volunteered for a few years until the symptoms of PTSD from the assault were too much to bear and I was constantly getting triggered by the work. I went from being a volunteer to being a client. I was so very fortunate that I was paired with one of the most amazing therapists I’ve ever met! I firmly believe that there was some divine intervention that led me to her like how perfect was it that she’s from my hometown of Monterrey Mexico, and is bilingual. Therapy became a beautiful safe and healing space and after about a year of work I was finally able to say out loud “I was raped, I’m a survivor and it was not my fault” I’m getting chills as I type this. This is the first time I talk about it in a public forum. It is important to be visible, it is important to talk about the violence we experience in this cis-hetero patriarchal society because it helps others not feel alone and feel seen. If you are reading this and have experienced sexual violence or gender-based violence I want you to know that I see you, I’m here with you, I believe you and it was not your fault, it is never the survivor’s fault.

For me, International Women’s Day is not a day to say “Congrats to all women” or “You Rock! Keep on being awesome” on social media. It is so much more than that, it’s the way I found healing, it’s the light that fired my passion for social justice and my political education. On this International Women’s Day, I challenge you to get out of your comfort zone and participate in activities to advance gender equality, whether that’s going out to a march, organizing your own march, or calling out gender inequalities in your community. If you’re not in a position to do this here are other things you can do: buy from local women, trans, nonbinary POC businesses, follow people on social media doing the work and share their content, volunteer at your local women’s shelter, or rape crisis center, make menstrual product goodie bags and pass out to houseless folx in your community, volunteer at your local shelters, LGBTQ youth centers, etc. The work starts at the local level in our own communities with our people.

I will end by telling you some of the reasons why on International Woman’s Day I go out on the streets and march:

Everyone has a voice, there are no voiceless people, there are however people that are systemically silenced. I challenge you today to use your voice to change those systems of oppression and let’s all work together to create change and a more equal, sustainable world for all of us. 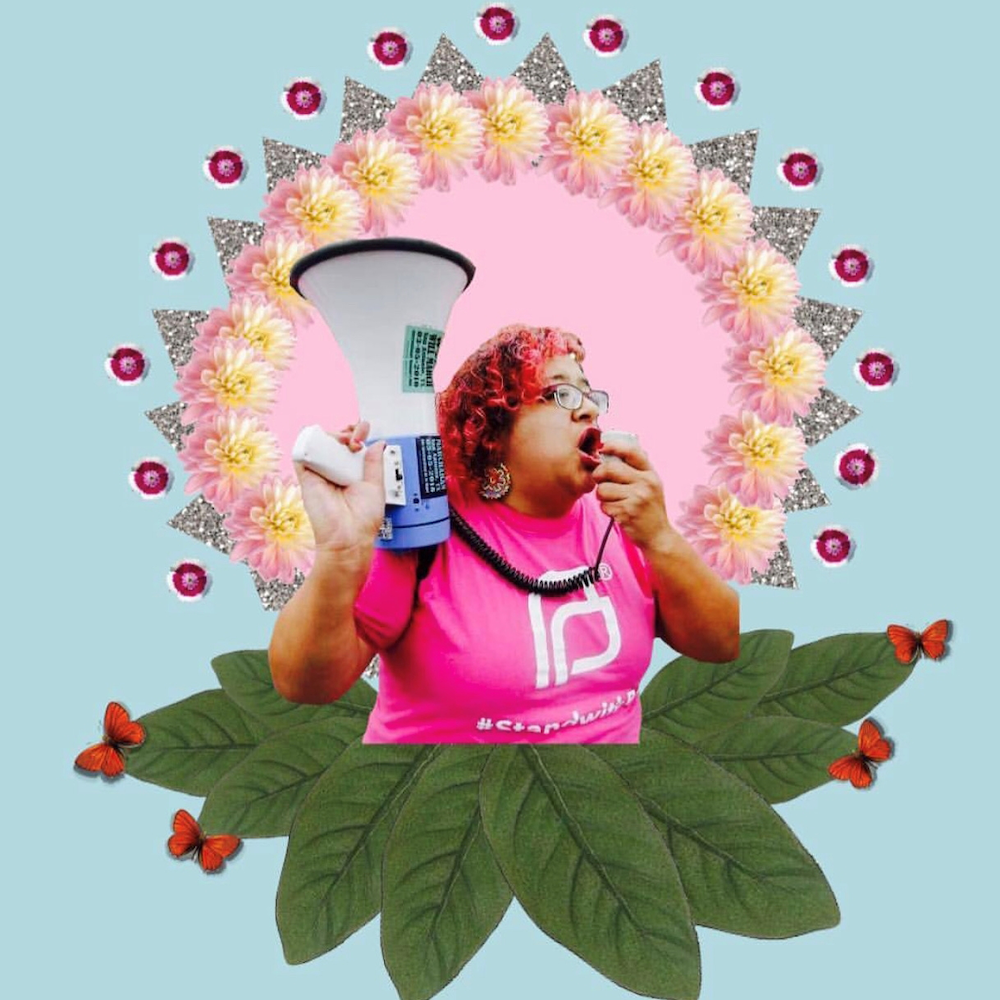 Barbie (they/them/elle) is a brown trans-non-binary fat, queer, immigrant activist. They currently work in philanthropy for an organization that funds over 150 intersectional organizing efforts, mostly led by women of color and transgender and gender-nonconforming people of color. From 2018 – to 2021 they have served as a member of Mayor Ron Nirenberg’s LGBTQ+ advisory committee in South Texas. In 2017 Barbie co-founded Son Queers, a collective of queer, trans & non-binary musicians that share, teach and play traditional son jarocho music in a safe inclusive environment with the mission of healing through art and music and resisting the hetero-patriarchal-normativity that is prevalent in the son jarocho culture. Barbie is also a founding member of Los MENtirosos San Antonio’s premiere all Latinx drag king troupe. Barbie is also part of the Star The Wave team focusing on community building, holding space, creating connections and meaningful relationships and in turn raising the vibrations for this beautiful thriving community of positive change-makers. You can find Barbie around Texas leading chants on a megaphone, lovingly yelling at people to vote, playing the jarana with Son Queers, or transforming into their drag king persona Pancho Panza and dancing the night away.