Coming out in Corporate America : The importance of visibility

Home » Community Perspectives » PRIDE » Coming out in Corporate America : The importance of visibility

My name is Lily, I’m transgender, and I go by she/her pronouns. I started my wave in earnest in early 2020, around the time we all went into lockdown for COVID-19. At first it was a modest ripple: I came out to my closest friends, family, and colleagues, which started our collective journey learning about transgender identities, experiences, and issues. Since then, I’ve come out to many more people, started living my life fully as Lily, and begun paying forward some of the knowledge, resources, and support I’ve discovered for myself over the past 18 months. I think it’s safe to say my ripple has crested into a full-blown wave!

I’m an educator at heart, so I feel the best way I can give back and make an impact on our world is by introducing the uninitiated to transgender identities and supporting other trans folks by being present, sharing the positive aspects of my own experience, and making connections for anyone who wants to learn or do more. I’ve already started to see this pay off, and I’m looking forward to continuing to do my part to make the world a safer, more inclusive place for trans folks everywhere.

One recent example was when I changed my name and came out to over 3,000 colleagues on this year’s Transgender Day of Visibility (31 March 2021). I started coming out to folks at work back in October 2020, but this was the first time I made a public statement and broad attempt to educate people at work and in my broader network about transgender issues. My post – shared both internally at work and externally via LinkedIn – was simple. I stated my name, gender identity, and pronouns while also sharing a transgender advocacy resource from a non-profit organization called Out and Equal. The response was overwhelming, garnering over 300 positive reactions on Teams, 2,800 views on LinkedIn, and close to 100 comments or direct messages from people around the world.

Many of the people who reached out to me on TDOV expressed their gratitude for me sharing a perspective that either enlightened them about something with which they were previously unfamiliar or empowered them to be a more supportive person for the trans and other LGBTQ+ folks in their lives. I’ve gotten similar reactions from people in the outside world, other members of the transgender wellness support group I attend, and even strangers upon meeting them for the first time. With every connection, comment, and kind word, I feel my wave growing, and that further inspires me to bring the best of myself to the world every day.

I guess the moral of the story has to do with the importance of visibility. Early in my transition, I found that reading or hearing about others’ transgender identities and experiences was crucial to preparing me for the steps I’ve taken myself, including giving me the courage to change my name and be myself fully at work and out in the world. I know I have a long way to go; as I told my wife recently, “This really is a journey sort of thing” (I’m not the most patient person). However, knowing I’m not alone and feeling like I can help others who may feel lost (trans or not) gives me the strength to carry on and continue spreading the good word about the awesomeness of being trans! 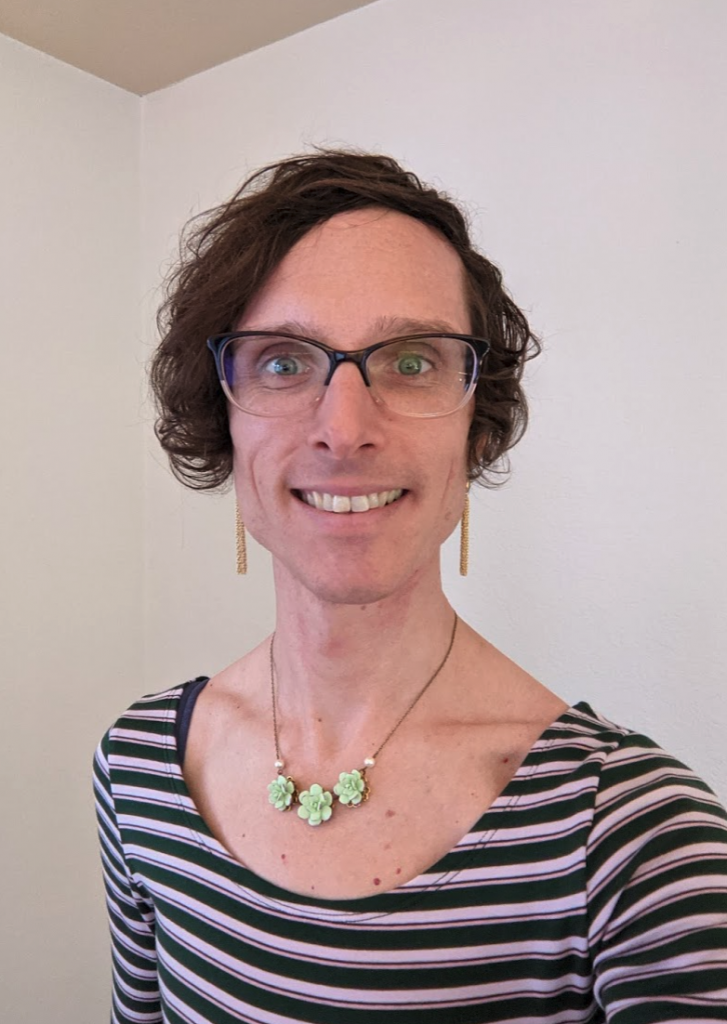 Lily (she/her) is an educator at heart, currently running Employee Experience for a software company based in Austin, TX.

Outside of her day job, she’s working on ways to tell her story more broadly and otherwise amplify her message of trans visibility, inclusion, and belonging.

After a (partly) COVID-mandated hiatus, she’s also looking forward to getting back into the Austin improv scene, having “grown up” in the theater and then finding a wonderfully supportive and energetic community at the Hideout and other Austin venues.