Coming to America – The Complex Path to Naturalization

A question I often ask in trainings is: So how does a foreign-born person get to live and work in the United States permanently? Most participants, in this case public sector employees, often respond: citizenship. Well yes, that’s correct, but before becoming a citizen? The answers that follow are an often conglomerate mess of guessed responses, mostly inaccurate about what it takes to have the “golden ticket” to achieve the American dream.

It took me 19 years after arriving in the United States to become a naturalized U.S. Citizen. The complex paradigm that makes up America’s immigration system includes countless pieces of legislation, executive orders, travel bans, eligibility criteria, vetting processes, and unmistakably a long (very long, extremely long) waiting list. We hear in the news the phrase “fix our broken immigration system,” and while the average American has no earthly idea what this means, millions of men, women and children live their lives in pins and needles hoping that maybe, just maybe, a new presidential administration will finally grant them an opportunity to someday, somehow, become a lawful United States citizen.

I don’t blame you if you can’t fully understand what it means to have your life hang in the balance by one piece of paper. I didn’t either, until I was 13 years old. My parents divorced after a tumultuous marriage – Mom left a foreign country to her, my birth country of Venezuela, to finally be closer to family. In 1993 my Mom, two younger brothers and I landed in Southcentral Kentucky out of all places to begin a new life. I thought it’d be a magical new beginning for us–an adventure full of possibilities–but little did I know the challenges and struggles ahead. The years that followed, my family and I were stuck in what seemed like an unending “limbo” that placed mounting limitations on what we could do, but for Mom there was no turning back, only looking forward and ahead.

My Mami was the everlasting optimist that our situation would soon change, but as the years went by I grew increasingly preoccupied for our security, our safety, or the prospects of really making a life in the United States. We wanted it so badly, we’d done all the right things just not all in the right order, so why was it taking so long. Desperation set in my Senior year of High School, the “just-arrived four years earlier little Latina girl from Venezuela” was graduating with a 4.0 GPA and 7th in my graduating class; yet I had no prospects of a college scholarship let alone the hopes of being admitted to a University. A dreamer is what kids like me would later be called, but at the time all I wanted was a chance to live a normal life.

It took 9 years – nine excruciating and painfully long years. When you are a teenager times goes by so slowly anyways, but even more slowly when your rights as a human being are completely at the mercy of a system out of your control. The psychological impact of those years still haunts me today 28 years after arriving in the U.S. Yes, I was finally free to live wherever I wanted, work wherever I desired, do whatever my heart longed for but for those of you following my timeline – I am not yet a U.S. citizen.

Nope, citizenship is NOT automatic. It is an earned privilege, not a right. To become a U.S. citizen, or a naturalized citizen, the resident “alien” has to be at least 18 years old, be a lawful permanent resident (green card holder) for at least five-years, apply for citizenship which costs at least $725, pass the biometric fingerprinting background check, pass a civics exam on U.S. history and government, an oral and written interview conducted by an immigration officer and then attend an oath ceremony pledging all allegiances to the mighty USA. If you are fortunate to be eligible to apply that is, the backlog in naturalizations in this country has skyrocketed during this past presidential administration. A process that would range an average of five months is now taking over nine months and in some cases up to 3 years.

I was ambivalent about becoming a naturalized U.S citizen because it meant giving up my Venezuelan citizenship. But months before my Mami passed, she made me promise that my brothers and I would become U.S. citizens. So in honor for my Mother’s sacrifice I would embark in the process of become a naturalized U.S. Citizen – the process wasn’t difficult for me because I’d been educated in the United States and fluent in English by now – nevertheless I was mortified of the possibility of being denied this privilege due to my past. I’d rationalized in my head many times how I’d explain everything to the immigration officer: “I was a minor sir, when I was brought to the U.S. I had no idea how things worked.” Thankfully, my worst fears never materialized. I was home free, I had pledged my allegiance to the United States of America. The year was 2011; I was now an American Citizen!

The years that followed and an opportunity to be in a position as International Communities Liaison for my local City government, fueled my earnest desire to see more and more eligible immigrants in my home state of Kentucky become U.S. Citizens. I am fortunate to live and work in a very diverse community with residents from all over the world; in addition to the fact that, my city actively resettles refugees through a local refugee resettlement organization which has allowed me to meet hundreds of individuals who could pursue a pathway to citizenship. Our city was not big enough to warrant having its own naturalization ceremony, so the majority of legal permanent residents seeking naturalization have to travel an hour and a half away to become naturalized.

As a result I thought about a way to recognize their accomplishments and decided to organize a local recognition in our City Hall, where our Mayor and elected City officials could individually congratulate every person that had become a naturalized U.S. Citizen in the past year. The first year of the event I didn’t know what to expect, we literally packed City Hall! It was amazing to see the faces of once refugees or foreign-aliens having such a newfound pride and patriotism to their new home country. Even more powerful was seeing the faces of elected officials as they were meeting their newest constituents. After the success of our first event, we proceeded to organize this recognition yearly. It was incredible to see that every year the number of newly naturalized U.S. citizens to be recognized grew substantially, and by the year 2019 the local reception recognized nearly 500 newly naturalized men, women, and children in a city with a total population of less than 70 thousand.

This was just the beginning, I started to get more connected to national efforts to promote and foster U.S. Naturalizations. Projects like “Cities for Citizenship,” a major national initiative aimed at increasing citizenship among eligible U.S. permanent residents and encouraging cities across the country to invest in citizenship programs. It is chaired by New York City Mayor Bill de Blasio, Chicago Mayor Lori Lightfoot, and Los Angeles Mayor Eric Garcetti, with support from the Center for Popular Democracy and the National Partnership for New Americans. On their website it states that there are currently 8.8 million legal permanent residents in America who are eligible for citizenship – 52% of whom remain low-income. Their naturalization would provide access to better paying jobs (up to an 11% increase to their personal earnings), academic scholarships, and myriad other benefits.

Andrew Carnegie, one of the most influential philanthropists of his era, was a Scottish immigrant who came to the United States at the age of 12. He built Pittsburgh’s Carnegie Steel Company, which he sold to J. P. Morgan in 1901 for $303,450,000. It became the U.S. Steel Corporation. After selling Carnegie Steel, he surpassed John D. Rockefeller as the richest American for the next several years. Carnegie said it best about becoming a U.S. Citizen that “there is no class so intensely patriotic…as the naturalized citizen and his child, for little does the native-born citizen know of the value of rights which have never been denied.” Nothing rings more true to me about becoming a U.S. citizen than that quote by Carnegie; and while my journey to citizenship was trying and difficult, it has given me and my family a true appreciation for the rights and privileges that citizenship offers.

Today more than ever U.S. Naturalizations play a crucial role in the diversification of our electoral voices. Engaging and promoting pathways for citizenship helps to ensure that individuals who call the United States home have the ultimate privilege for their voices to be heard where it counts! Join me and countless of others in pursuing the American Dream! 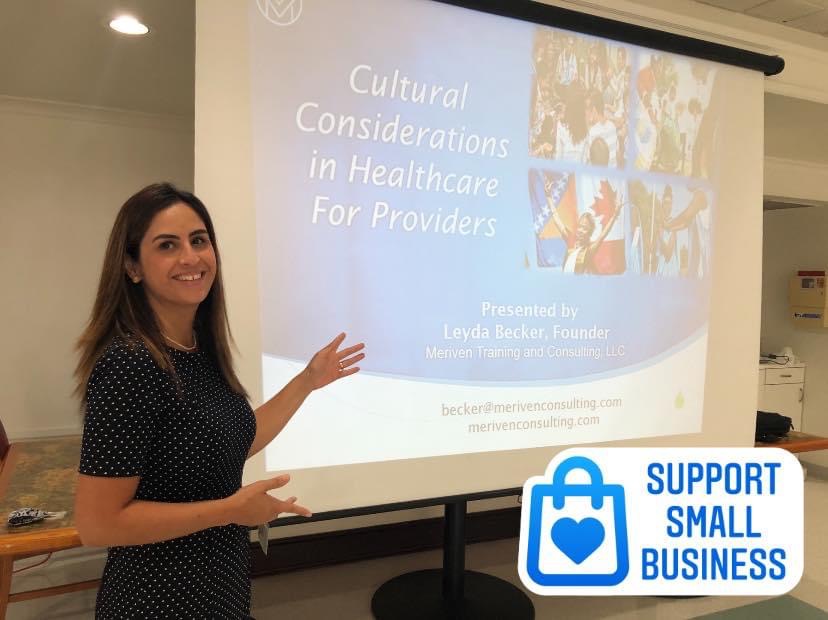 Leyda Becker is the Founder and President of Meriven Training and Consulting LLC. She is a dynamic trainer and speaker who has implemented a variety of customized trainings to hundreds of employees in both the public and private sector. With over 19 years of experience as communications professional specializing in the field of Cultural Competency and Language Access, she can help your team meet workforce needs by building a culturally diverse and inclusive workforce.

Leyda is a powerful advocate for the international community in Bowling Green, Kentucky. Leyda brings her own experience of immigration to her role as International Communities Liaison for the city of Bowling Green. She works to ensure that language is not a barrier for people to meet their basic needs and access important public services.